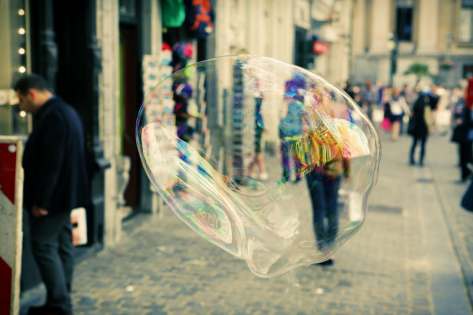 In an earlier post I referenced an excellent market valuation model that I found at the Philosophical Economics blog. To sum it up: the model projects the next 10 years of market returns by using the average investor allocation to equities. The theory is that most bull markets are fueled by rising valuations as investors move money from other asset classes into stocks. The model tells you how much “fuel” is out there to push equities higher.

The Q4 2016 number recently became available over at Fred. The current average equity allocation at the end of the year was 41.279%. Let’s plug this into the equation I referenced in my earlier blog post on this topic:

We can therefore expect the market to deliver a 4.48% rate of return over the next ten years. Not particularly exciting, but not the end of the world either.

Most hedge fund letters this year emphasized how market valuations are at historic highs and take a cautionary approach to stocks. I agree with their spirit because I think everyone should always approach the market with caution. If someone cannot handle losing half of their money, then they have no business in the stock market. A drop of that magnitude can happen at any time no matter where valuations stand. That short-term risk is the very reason that stocks outperform other asset classes over the long-term.

If I were an alarmist, I would agree with some of the hedge fund letters and say: “The market hasn’t traded at these valuations since 2007! Get to the chopper!” This implies that we are on the brink of another historic meltdown in stocks. This is the prognostication that is often heard about stocks today. I think it is misleading.

Valuation simply predicts the magnitude of future returns over the long run. Higher valuations mean lower returns and lower valuations mean higher returns. That’s it. It does not predict what the market will do over the next 12 months. It does not mean that if you wait long enough, you’ll have an opportunity to buy when valuations are at more attractive levels. Anything can happen in the next year. There could be an oil embargo. A war could break out. Terrorists could strike. Our politicians could cause another crazy showdown that imperils the economy. Trump-o-nomics might actually work. Maybe it won’t. No one really knows and anyone who proclaims otherwise is lying.

It is tempting to look at market valuations as a tool to time the market. Wouldn’t it be great to sell in 2007 and buy in 2009? Get in when the market is depressed and get out when valuations rise and the market looks like it is due for a correction? My view is that market valuations should not be used as a market timing tool. When it comes to timing the market, I think Peter Lynch put it best when he said:

Stopped clocks are always right twice a day. This is how I feel about the permanent bears. They certainly called it in 2008, but did they call the turnaround? How many of them have been predicting disaster for the last decade and have been proven wrong year after year? There is bound to be another meltdown at some point in the future, but there is no way to predict when that will happen. The wait can be long. While you wait, more money can be lost through unrealized gains than is lost in the actual correction. 2017 may be the year for a major market meltdown of and the end of the bull market. Perhaps. Taking the advice of the permanent bears will help you avoid it, but how much more money was lost listening to their advice since 2009? It doesn’t make sense to refuse to participate in the market simply because the market isn’t offering compelling valuations.

Valuation in a Vacuum

Stock market valuation doesn’t occur in a vacuum. One should always compare the expected returns in stocks against the expected returns in other asset classes. My view is that the best asset to compare stocks to is AAA corporate bonds. The way to think about stocks is as corporate bonds with variable yields. The question isn’t “is the market overvalued?” The question is “Do current earnings yields justify the risk of owning stocks when compared to the returns on safer asset classes?”

This is why interest rates drive the stock market.

Below is a historical perspective of market valuation compared to the interest rates on corporate bonds. The expected 10 year S&P 500 return is derived from the equation described earlier in this post. 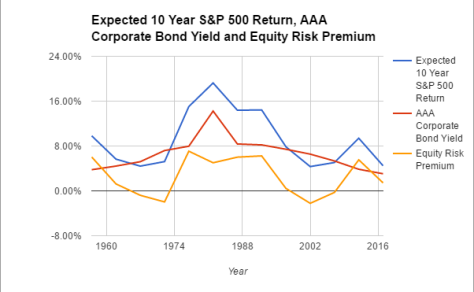 As you can see, there are times when the market adequately compensates investors for the risk of owning stocks and there are times when it does not. It is also evident that there is a strong correlation between interest rates and future market returns. Higher interest rates mean that stocks need to deliver higher earnings yields, something that is usually achieved by a market correction that depresses P/E ratios and boosts earnings yields.

From this perspective, the market isn’t wildly overvalued. The current market valuation is largely in line with historical norms based on where interest rates are today.

That is the right way to think about stocks. It is folly to think “valuations are too high, therefore I will not participate because a correction is imminent.” That is short-term prognostication and it is typically wrong. No one knows what will happen over the next year and market valuations won’t provide the answer.