I bought TAIL yesterday. I basically bought this as a hedge against the stocks that I still own that I can’t bring myself to sell. This helps me stay somewhat market neutral during this bear market.

I’m not taking an outright short position on the market. Yet, anyway. Still struggling with whether I want to actually do that.

The good news is that the deep value universe of stocks in the Russell 3K with an EV/EBIT multiple under 5 is now over 200 stocks, which is the best environment we have seen since the financial crisis.

Under normal circumstances, I would be a buyer. I just don’t think markets bottom when a recession is only just beginning. 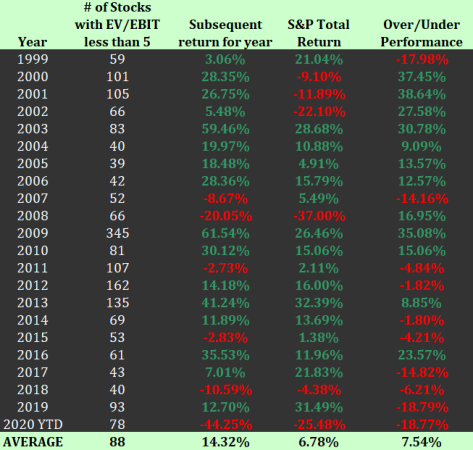 Other good news, after yesterday’s decline, market cap/GDP is now down to 110%. This isn’t cheap, but better than where we were. There are a range of outcomes from here depending on where valuations are 10 years from now:

The outcome is largely unknowable. Future valuations strongly depend on what interest rates are 10 years from now.

I think you could make a strong case for both outcomes: interest rates will be lower as we emulate the Japan example, which suggests valuations can be higher.

It’s also possible interest rates will be higher. I think that’s the likely outcome, as our demographic situation is different than Japan and I think money velocity will likely pick up as Millennials enter their peak earnings years. It’s also quite possible that, thanks to quarantines, we’ll have a baby boom in 9 months which is also bullish for the long term prospects of the economy.

In any case, we have to look at the range of outcomes. The base case is 1.7%, which isn’t really too exciting compared to the risk of owning equities.

Markets don’t bottom at the beginning of a recession when unemployment is low.

Of course, there isn’t anything normal about what’s going on right now. This was a violent move down, and for all I know the market could make an equally violent move up when this is all resolved.

I turn to valuations and history for guidance. In the last two recessionary drawdowns, market cap/GDP got down to 75% in 2003 and 57% in 2009. That means this likely really isn’t over until we get down to at least 80%.

The yield curve is currently un-inverted. That’s good news. I’m unusual among cranky market bears in that I want the Fed to ease and try to stop this recession aggressively and think they’re doing the right thing by throwing the kitchen sink at this. I also think that the federal government needs to pursue hardcore fiscal stimulus to end this.

Markets don’t bottom when the yield curve just starts to un-invert. They bottom when we have a large spread between the 3-month and 10-year. That’s a pretty good indicator that an economic boom and turnaround is in our future. We aren’t there yet.

Buuuut . . . at least we’re starting to get there and are headed in the right direction.

More good news is that the vaccine is being tested. Let’s make sure this works and roll it out and defeat this thing.

Stay safe and healthy. Hug your people. Well, those you’re safely quarantined with. 🙂