Harry Browne was a libertarian activist. He was also skilled investor. He successfully predicted the inflation of the 1970’s and took on heavy positions in gold at the beginning of the ’70s.

While Harry Browne was a skilled investor and foresaw the inflation of the 1970’s, he didn’t think that most people should try to predict the market and pick stocks.

For this reason, he sought to create a simple portfolio that would deliver a decent return  over long periods of time and offer protection in different economic environments.

The permanent portfolio is quite simple and extremely brilliant. It invests in only four separate asset classes: 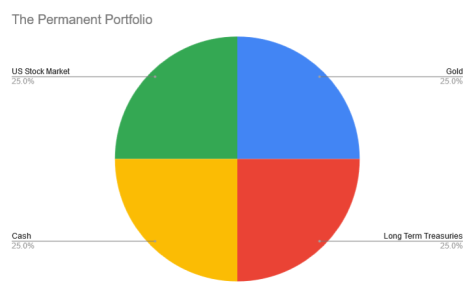 Gold protects during inflationary periods or currency debasement. Cash restrains drawdowns and provides dry powder for rebalancing, along with providing a source of funds for shocks to income. Long term treasuries perform best in deflationary panics, like 2008 or 1929. The US stock market, obviously, delivers a return during periods of prosperity.

And that’s it! Four asset classes and a very small allocation to stocks.

There are few financial advisors that would endorse such a conservative approach.

How does it perform?

You would think that a portfolio like this would dramatically under-perform US stocks with only a 25% allocation to equities.

Since 1970, the portfolio and US stocks had the following characteristics:

The permanent portfolio underperformed, but one would expect that the underperformance would be a lot more significant with only a 25% exposure to US equities.

The portfolio accomplished this result with massively less stress compared to solely investing in US stocks. The 2008-09 drawdown was only 13.52%, compared to 50.89% for US stocks. The same is true for other terrible years for equities.

In fact, most of the time, the permanent portfolio goes up when US stocks are going down.

It’s also worth noting that valuations for US stocks (and hence, returns) were a hell of a lot lower and returns were higher in the 1970-2000 period than we can expect from the future.

That’s not going to happen again.

It’s not going to happen because today’s stock valuations are close to 2000 levels. Poor returns since 2000 have also been buoyed by a massive decline in interest rates, which probably won’t happen over the next 20 years considering that rates are now near-zero.

I think that anyone who expects 10% returns from US stocks from these valuations is going to be very disappointed. For the next decade, I wouldn’t be surprised if US stocks deliver a flat to negative return, likely with a gut wrenching crash somewhere in the mix.

Right now, we’re only slightly below internet bubble valuations, meaning 2000 is probably a more likely starting point for returns than what we experienced in the 20th century.

So, how did the permanent portfolio perform since the peak of the last bubble?

Since 2000, the permanent portfolio has outperformed US equities!

Meanwhile, it outperformed US stocks with significantly less stress. Lower drawdowns, lower volatility. It wouldn’t surprise me if this happens over the next twenty years, as well.

Since 1970, the permanent portfolio has a higher safe withdrawal rate, too, despite the lower returns.

This happens because of the lower risk, not in spite of it. The lower risk and lower drawdowns make it much safer to withdrawal money from this portfolio in retirement.

It’s a result that runs counter to everything we’re normally taught about investing. Namely, that risk always equals reward.

It’s that elusive 21st century “equity risk premium,” which doesn’t seem to exist anymore, considering that bonds have outperformed stocks over the last couple of decades.

We’re taught that if someone is aiming for retirement, that they need to take massive risks to earn a high rate of return. The evidence doesn’t back this up.

I don’t invest in Harry Browne’s portfolio, but my own asset allocation takes cues from this approach. I own long term treasuries to help me out during market panics and deflationary environments. I own gold to protect myself from the potential of currency debasement. I think small cap value, international small caps, and REIT’s will outperform market cap weighted indexes, which is why I own those instead of indexes.

I think the permanent portfolio is a very sound approach that makes a hell of a lot of sense.

It certainly makes more sense to me than buying a stock market index fund at crazy valuations, which are practically guaranteed to deliver low returns.

100% US stocks is also guaranteed to deliver an incredibly volatile result and massive drawdowns, as demonstrated by market history.

Too many people, in my view, think that one has to endure massive pain to grow one’s savings. The permanent portfolio is one example that there is a better way.

If you want to read more about Harry Browne’s portfolio, check out his book, Fail Safe Investing.

The Black Seeds – One By One.

Featured in my favorite episode of Breaking Bad, Four Days Out.